Travel the Ferries of the Lower River Passage along the St. John River

About the Cable Ferries Route

The cable ferries that join communities on either side of the St. John River are among the great practical pleasures of travel in the Lower River Passage. On one hand, they function as small, stable drive-on-and-off platforms, convenient floating links in a highway system in which bridges would be unfeasible. On the other hand, they offer the excitement of any waterborne trip: a series of unique perspectives up-river and down, and the thrill of a gradual approach to an unknown shore. Most are free, courtesy of the Province of New Brunswick. Ferries of some type have been used to cross the St. John River for hundreds of years. Late 18th and early 19th century ferries were often privately owned and operated. The early ferries ranged from rowboats, equipped to transport only a few people at a time, to large flat-bottomed scows, cap- able of carrying a horse and buggy or two, as well as foot passengers. Some were propelled with sculls, or poled in shallow water, while others were pulled across the river with ropes.

Drawing ferries from shore to shore by ropes is an ancient technology. The Lower River Passage’s under- water cable ferries, however, are the innovation of early 20th century New Brunswick engineer and inventor William Pitt. In Pitt’s unique design, a long slack wire cable stretches from one shore to the other, passing in a special channel through the bottom of the ferry, below deck. A diesel engine powers the ferry to pull itself along the cable like a person climbing a rope. Cable ferries quickly spread throughout the St. John River region in the early 1900s, though they were sometimes replaced in winter by ice roads, making for risky crossings at the start and close of the season. These ferries are specially engineered to cope with New Brunswick’s winter and early spring runs of river ice, followed by the annual flood or “freshet,” when water levels sometimes rise metres above seasonal norms. 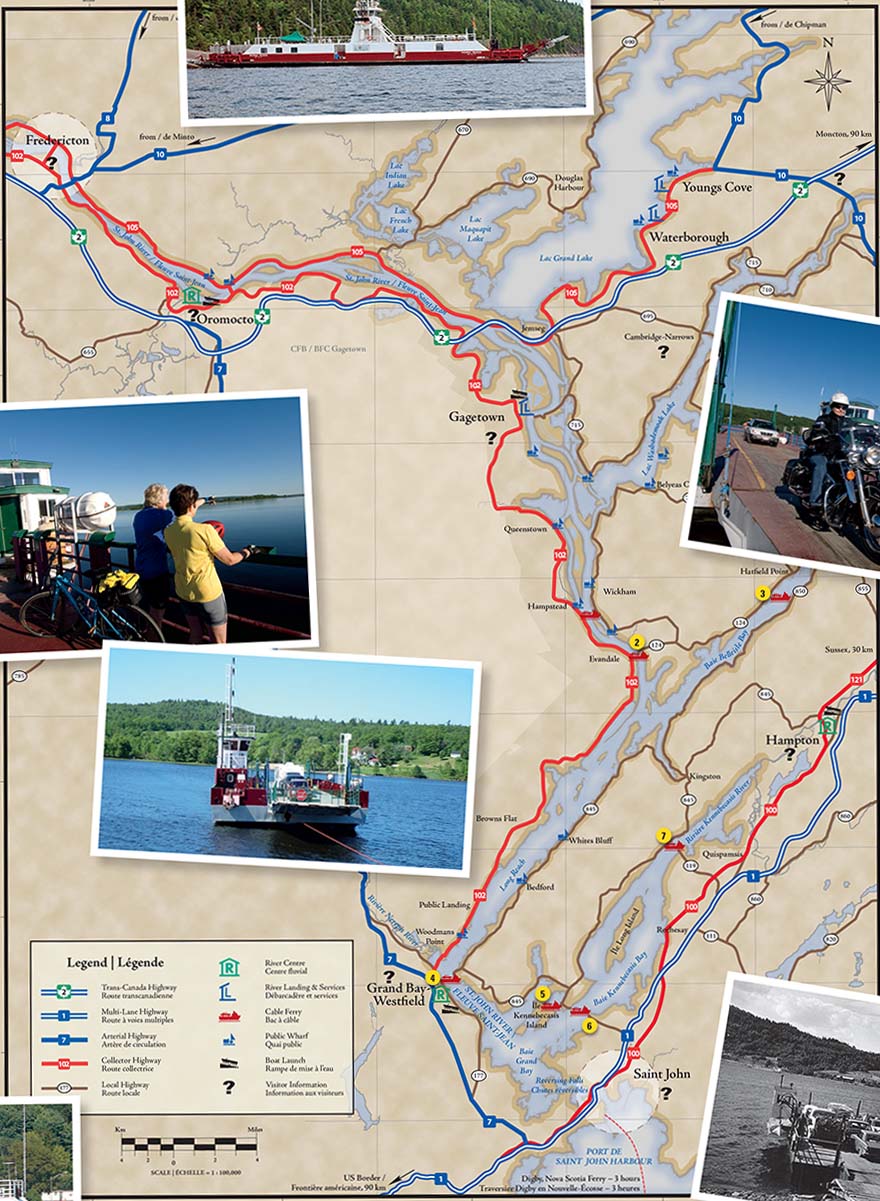 The picturesque Village of Gagetown is home to many artists and craftspeople. On the other side of the river, Lower Jemseg provides access to Grand Lake and the Grand Lake Meadows, the largest wetland complex in the Maritimes and a world-class birding site. Upriver from Jemseg, a cairn at Sheffield  United Church commemorates an 18th-century church building that was famously moved over the ice by 100 yoke of oxen. A trip on the Gagetown Ferry between these two shores joins art and nature. The Gagetown Ferry operates just below Gagetown, off Route 102, and Lower Jemseg, off Route 715

The Evandale Ferry and the historic Eveleigh Hotel, adjacent to the ferry landing, recall the heyday of steamboat and railway tourism in the Passage in the 19th and early 20th centuries.

Pause in Evandale for an interesting walk upriver on the trail. Just beyond the trestle is an old quarry that until recently supplied stone across the Maritimes and beyond. Granite blocks with a maple leaf pattern designed by a Hampstead teacher were shipped from here on railcars for the National War Memorial in Ottawa.

The Kars side of the river provides easy access to Belleisle Bay and Washademoak Lake, and scenic drives along the river. The Evandale Ferry operates between Evandale on Route 102 and Kars on Route 124.

The trip across Belleisle Bay explores one of the characteristic long, narrow fingers of water stretching inland from the  eastern side of the lower St. John River. On either side of the bay are the gentle forested hills and small mixed farms typical of southern New Brunswick. Tidy cottages dotted  near the shores testify to summer holidays and gracious historic churches note the passing of time.

The Belleisle Bay Ferry operates between a stretch of  the bay off Route 124 and Long Point on Route 850 on the Kingston Peninsula.

This is one of several crossings to and from the Kingston Peninsula, located between the St. John River and the Kennebecasis River.

A visit to Grand Bay-Westfield recalls the Great Fire of 1921 that destroyed more than 50 homes in a single afternoon. The results are visible today in the unusually large number of fine 1920s-era homes built as replacements.

At Hardings Point Campground, the Heans family proudly display  mementoes of the Victorian racing sloop The Canada, which won more than 17 trophies in a 40-year career — a testament to the rich sailing heritage of this part of the Lower River Passage.

The Westfield Ferry operates between Grand Bay-Westfield, adjacent to the Brundage Point River Centre on Ferry Road just off Route 177, and Hardings Point at Route 845 on the Kingston Peninsula.

This is where William Pitt developed his revolutionary underwater cable design in the early 1900s. He overcame the difficulty of using a boat to lay out the heavy, bulky cable by laying it on the frozen surface of
the river, and waiting for the ice to melt and sink it to the bottom — a truly Canadian solution! The Kingston Peninsula was Pitt’s home, and a cable ferry operating at Gondola Point is named the William Pitt II in his honour.

Featuring the shortest run of any of the cable ferries of the Lower River Passage, it operates during summer daylight hours only, carrying cottagers and other visitors to and from summer homes on the island. Once a prosperous farming community with its own school of more than 20 pupils, Kennebecasis Island is a quiet place today, with unpaved roads, and electricity and phone service that does not extend to all cottages.

The Summerville-Millidgeville Ferry is the only propeller-driven, as opposed to cableoperated ferry in the Passage. This nearly two-kilometre run across the wide mouth of the Kennebecasis River takes 15 minutes,
and the current vessel, the Peninsula Princess, carries up to 24 cars.

Millidgeville, a neighbourhood of Saint John, features Rockwood Park, one of Canada’s largest urban parks, and the Cherry Brook Zoo. The  Kingston Peninsula, on the other side of the Kennebecasis, offers scenic drives and views, as well as the central town  of Kingston with shops, services and Trinity Church, a National Historic Site.

The Summerville-Millidgeville Ferry operates between Sandy Point Road in Saint John and Summerville off Route 845 on the Kingston Peninsula.