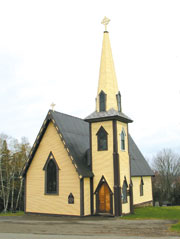 In 1786 Rev. Richard Clarke came to this area from Connecticut. He preached one-fifth of his time on Long Island where a church was built to accommodate people on both sides of the river. Long Island is situated across from Queenstown in the St. John River.

Around 1850, due to the ice and high water during freshet season, St. Stephen’s Church was moved. It was hauled on the ice by several teams of oxen to Wickham, on the east side of the river. Eventually this church was torn down.

Church services in Queenstown were held in a hall owned by S. L. Peters until a church was built in this community. The land on which the present church stands was given to the congregation by Clarissa Hewlett. Started in the summer of 1903, the church was finished in April 1904. Local people donated all labour and materials. Named St. Stephen’s, it was consecrated by Bishop Tulley Kingdon in August 1905.

The beautiful East Window is placed in memory of Thomas and Anne Hewlett, by their two daughters. Thomas Hewlett was a descendant of Lieutenant Colonel Richard Hewlett of DeLancey’s Brigade. He commanded a battalion on Long Island during the American Revolutionary War and was responsible for bringing Loyalist regiments to this area. In the adjoining graveyard a large pyramid shaped tombstone marks his grave.

In December, 2004 Arthur Mayes built and donated the very attractive sign situated by the side of St. Stephen’s Church, in memory of Roy and Annie Mayes.

This well maintained church celebrated its 100th anniversary in 2005.