The southern shore of Grand Lake will treat you to what is quite possibly the most magnificent sunset in New Brunswick. The province’s largest lake measures some forty kilometres in length and is dotted with camps and summer places, what a central Canadian might refer to as cottage country. The Fredericton tradition of running out to the lake after work for a mid-week grounding session continues today. In fact, more people commute to work in Fredericton from the sandy beaches of the lake than ever before. Access to Youngs Cove Wharf is located only meters from the former Trans-Canada Highway. The quiet lakeside road assures you of a pastoral silence that is broken only sporadically by the passing of Baby Boomer bikers riding their midlife rumbling toys. During the 19th century a different mode of transportation fuelled the resource based economy here. Lumber, coal, produce, and hay floated down the lake on river barges destined for Saint John, where they were shipped to foreign markets. 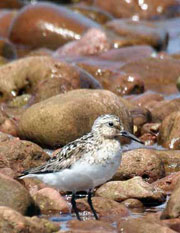 Generations of Spotted Sandpipers foraging along the shoreline have had to make a rapid retreat up the beach when the wakes of river barges pushed miniature tidal waves their way. A sixth sense and extremely acute peripheral vision has kept these birds from being swept off their feet. Not too far from shore one can often see the large low-riders of the lake. On this southern shore of Grand Lake hundreds of Common Loons gather prior to their autumn migration to the Bay of Fundy and points beyond. On the day they receive the ‘GO’ signal, the timeless mystery of bird migration is enacted once again. The procession of several intermittently spaced single birds, flying relatively high over the water, will certainly generate thoughts around the phenomenon you are witnessing. If one is blessed with patience and curiosity they can see dozens of birds moving not too far offshore headed to the Jemseg River, the lake’s outlet into the St. John River.

From the wharf you can make your way onto the shore of the lake to the east where Great Blue Heron work the shallows looking for crayfish and minnows are swept closer to shore by waves generated by dominant westerly winds. In the shallow vegetated bays that dot the lake, chattering Belted Kingfisher practice their dives incessantly, much like the repetitive trials of aspiring Olympic divers hoping to represent their country at the big event.

At the lake’s western end are found the Grand Lake Meadows. This shrub dominated wetland is the largest freshwater wetland in the Maritimes. The site is home to the rare Yellow Rail, a shy, medium-sized rail, whose residency and presumed breeding status is confirmed through a primitive but effective method of tapping two small stones together in order to imitate its call and elicit a response.

Grand Lake is also home to a colony of Common Terns. These birds become agitated and dive bomb any and all intruders when their nesting site is being threatened. When birds are seen displaying this behaviour one must quickly vacate the area as your presence is putting undue stress on the birds and continued disturbance could lead an abandonment of their nesting site and hence eliminating their reproductive potential for the year.
Another colonial nester, the Greater Black-backed Gull can also be found nesting on the lake. The impressive size of these birds makes them quite ominous to other species and a high level predator capable of taking birds the size of a large duck!

The clumps of large hardwoods, found along the shoreline and the small points jutting out into the lake that contain Silver Maple, Balsam Poplar and White Birch are home to the tree tappers. Many a commuting summer resident has awakened to the soft light of early morning on the lake and the slow and muted tapping of a Downy Woodpecker or the loud and urgent rattle of a Hairy Woodpecker.